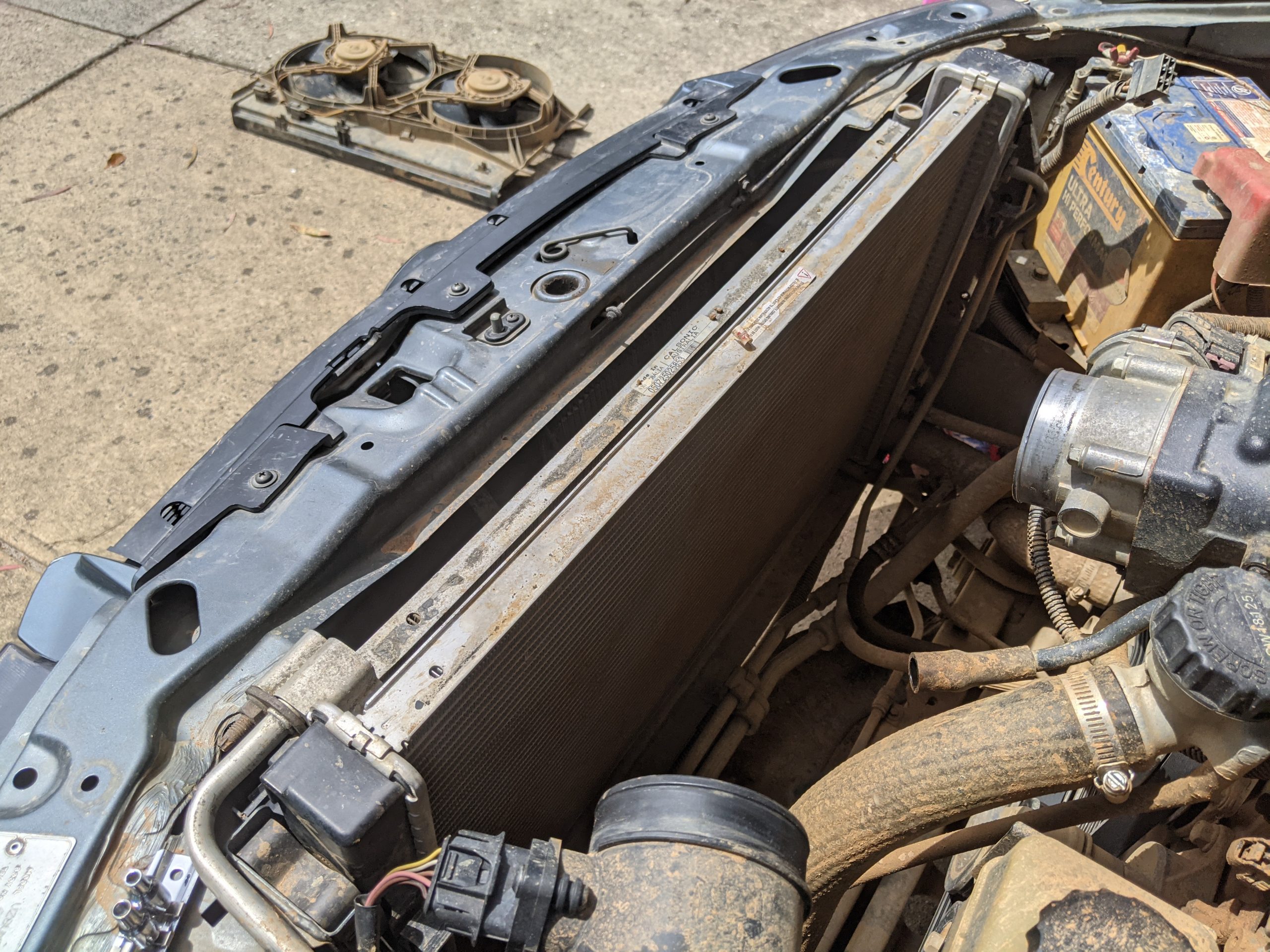 To be clear I’ve never really had a problem with the way the factory cooling is setup in the Adventra, in fact it was only once I got a ScanGauge that I became nervous about it – but mainly only due to the live data the computer would report to me but then I realised how much the cooling system does not take into account when deciding which cooling profile to use!

You should know that in the Adventra the single radiator cooling both the engine coolant and also the trans fluid together in the single unit for this reason I’ve always ran an aftermarket PWM brand trans cooler, what’s worse is while I’m off road I often learned that the coolant temperature even at 108 degrees Celsius the needle on the dash in the temperature area didn’t hardly move up at all.

I noticed you would need a coolant temperature of at least 109 degrees Celsius before you’d notice even the needle going up from normal running position and then when you read 114 degrees Celsius then it will pass the half way marker and from 114 degrees Celsius going up will it begin rising towards hot by this point its very hard to bring the temperature down – trust me I’ve been there many times off road I eventually resorted to plugging in my Vident workshop tool and manually telling the computer to activate all fans on hot days to combat engine temperature management. If you got the cooling going earlier than it gets in the low 100’s you’re often fine.

Now the big one if my coolant temperature is reading high, you can assume this heat may be absorbed by the transmission fluid since its shared within the same radiator, not great if you ask me! For me an override switch for high speed was of an importance and its cheap to do under $30AUD plus your time.

Your Adventra has 2 stages of active cooling and as standard you get 2 radiator fans left side is a 5 blade 293mm 180w fan and right side 5 blade 354mm 220w fan and there are 2 relays that control when stage 1 and stage 2 will operate under normal circumstances totaling 400w of active cooling.

Stage 1 will run when the below conditions are met:

Stage 1 will turn off when the below conditions are met:

Stage 2 will run when the below conditions are met:

If Stage 2 is active the computer will downgrade to Stage 1 when the below conditions are met:

Now understanding the above you can pretty much be sure that you wont get any Stage 2 cooling until your vehicles coolant temperature reaches 108 degrees Celsius and you may only see Stage 1 once you hit 104 degrees Celsius in the most common scenario, I often don’t run the AC while off road to reduce load on the motor but with the above conditions you may just want to force Stage 1 to kick in much earlier than if the AC was off.

The problem with all the above is often when off road vehicles moving slow through tough terrain or its slow going and there is not enough air passing through the radiator to cool both your coolant and transmission fluid this is why I wanted to create a manual override to trigger relay 1 and 2 to go on and get Stage 2 cooling on demand.

At this stage, we don’t see options in our VCM editor tuning software with HPTuners tool with an option to alter ECM/PCM fan control triggers. I am unsure if other tuning software has this ability or not.

Our option is to run a ground to a toggle switch than run 2 wires from pin 86 on Fan Relay 1 and Fan Relay 2 make sure there is a diode between Relay 1 pin 86 and Relay 2 pin 86 this will stop when the computers activates Relay 1 it wont also active Relay 2 and confuse the computer, if you don’t diode this link every time Stage 1 activates it will trip Stage 2 condition and all fans will go frequently plus you will also get a ‘Service Vehicle Soon’ error on your dash all the time while driving which is annoying adding in this diode stops this.

Once your wiring is done, run the wire that joins to both Fan Relays 1 & 2 pin 86 back to a toggle switch and create a ground link when the toggle switch is on, then every time you want stage 2 cooling you flick the switch, while this is active your dash will report ‘Powetrain Issue’ and log a code, if you don’t want this you can have your ECM tuned to change the DTC code to only display a ‘Service Vehicle Soon’ notice instead so as soon as you cancel the override on the switch it will vanish from your dash and gives a method for a good reminder it’s still overridden. We offer ECM alterations in Frankston, Victoria if needed for a fee (as we are charged a license to tune/alter your computer from HPTuners).

Now when you’re off-road and slow going on the rough stuff or going pretty hard on the soft sand and the trans is working very hard, assist it by forcing Stage 2 cooling giving the radiator a chance to keep the trans fluid temps low.

From everything I see in the service/workshop manual there is no consideration to transmission fluid temps that effect if stage 1 or stage 2 cooling should take place meaning an aftermarket trans fluid cooler is a must as a minimum if you off road in these wagons and you really need to think how hard is the transmission working in some conditions – I certainly know of plenty and the reason why I’ve installed my override switch.

I am thinking in the near future about getting an aftermarket temperature reader for the trans fluid.. perhaps and have an aftermarket active fan on the PWM cooler triggered based on that reading but in the future for now this will suffice – I’ve lived years without it and the same transmissions still going 50k later it is mainly due to the trip to Simpson Desert I thought about actually doing this finally.