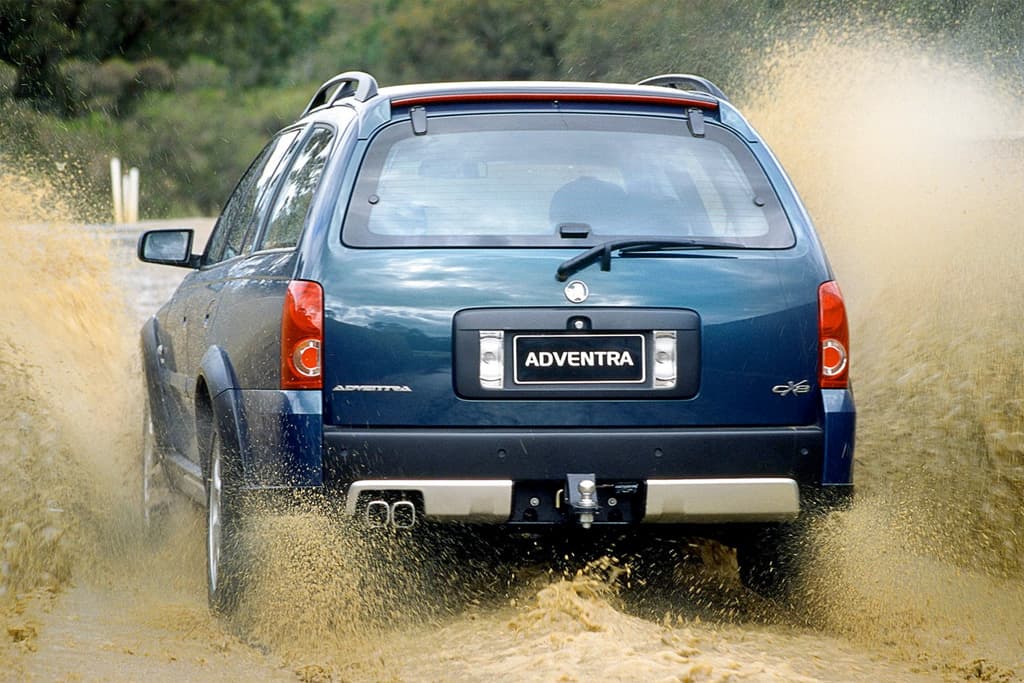 The Holden Adventra wagon had the distinction of being the first Australian-made all-wheel drive. A platform based on the Commodore wagon, the Adventra possessed the dynamic strengths of a passenger wagon with the ground clearance and off-road ability of more conventional four-wheel drives.

Hardware includes an adapter housing, three-gear transfer case, front prop shaft, front driveshafts and front and center open diffs (just like a four-wheel drive). Technically the Adventra is a permanent four-wheel drive with no low range gears, though many differences with the way this vehicle preforms compared to say a Toyota Prado. Make no mistake the Adventra is very capable especially once you add some ground clearance.

The first generation, released in August 2003, was V8 only as Holden waited until the VZ release of the commodore range where by the Allotec 3.6L V6 was used in place of the old Buick-sourced 3.8-litre V6 but in this post I will be only talking about the VZ model.

Features that make the Adventra so unique from the commodore range is the on board CrossTrac all-wheel-drive system which splits drive 38/62 front to rear. Adventra also rides 80mm higher than the commodore wagon totaling 200mm clearance.

Features the V6 has that the V8 missed out on the Bosch 8.0 which enabled the VZ Adventra to have ESP (Electronic Stability Control) HDC (Hill Decent Control) and EBA (Electronic Brake Assist) with both the V6 and V8 ABS equipped traction control system which makes up the software behind Holden’s CrossTrac technology.

Powering the Adventra you have options of a 3.6-litre V6 with five-speed automatic (190kW/340Nm) or 5.7-litre V8 with the older four-speed automatic (250kW/470Nm). A manual version was never produced. Both transmissions have been specially calibrated to work in an all-wheel drive environment, and in the case of the 4L60E four-speeder, shift times and harshness have been reduced from its earlier versions.

Unnoticeable but fact, the turning circle of the Adventra is slightly improved over the commodore based model 11.9m vs. 11.5m probably nothing to brag about but very useful out in the high country of Victoria.

Weight differences between the V6 and V8 aren’t that much they are essentially a 2 tonne vehicle. Nevertheless the V6 isn’t some slouch but it also isn’t frightening fast – enough power for its intended use as an all terrain vehicle. The V8 however feels just more aggressive, powerful & has a nice growl to it you just can’t compare that to the V6 especially if you intend to do some towing with the Adventra or trying to climb some serious inclines.

If you want to know the nitty gritty check the below specifications out.