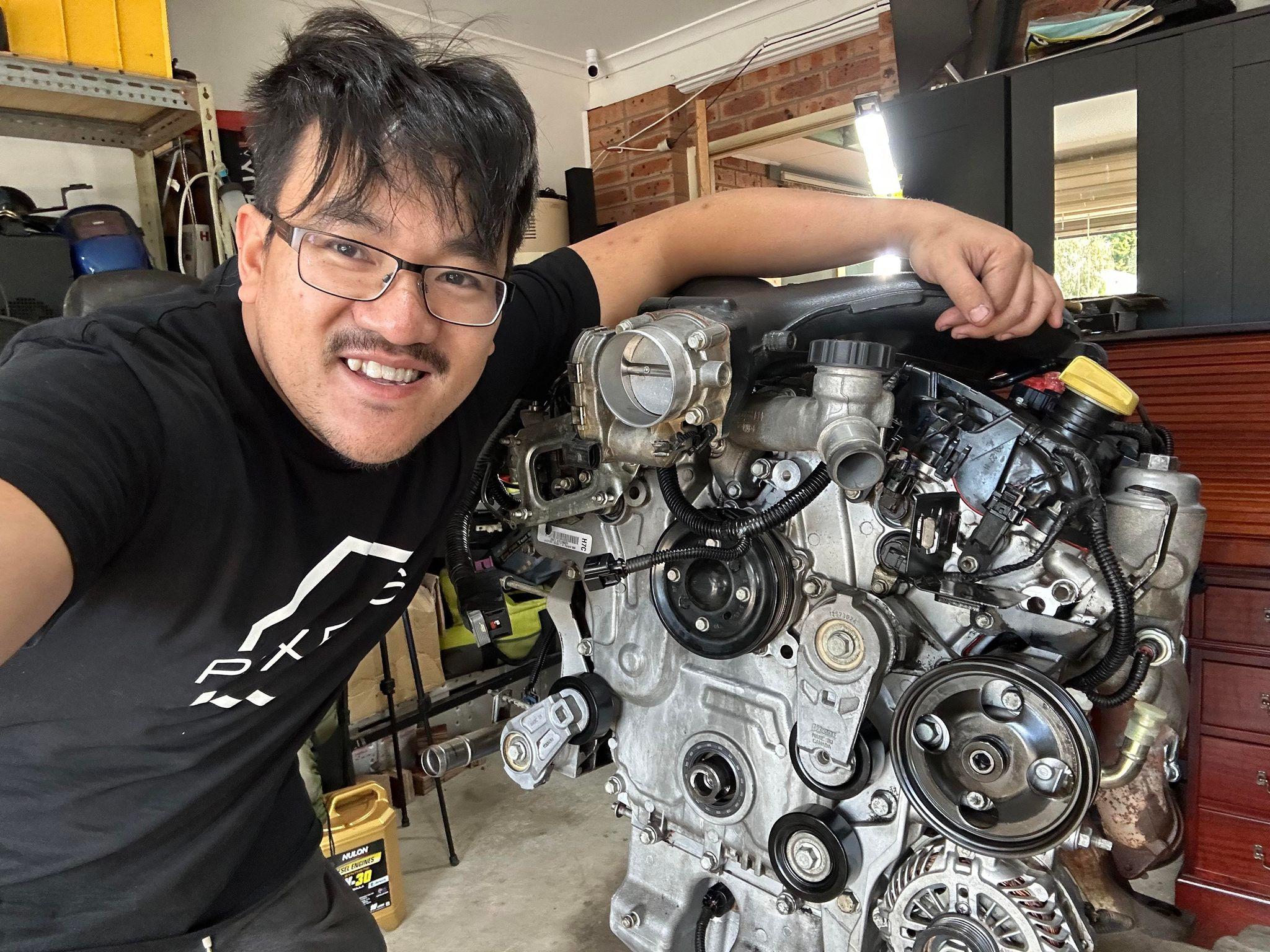 The global V6 engine is the first V6 engine program to address what Thomas G. Stephens, group vice president, GM Powertrain, says is a vital initiative: to develop world-class engines with fully contemporary features – such as dual overhead cams and variable valve timing – but at a competitive cost structure that allows use of the engines in a global mix of vehicles.

“Since the start, the global V6 project team was determined to introduce a V6 engine superior to all in the industry, and in record time,” said Tim Cyrus global V6 chief engineer. “The team tapped GM’s vast technical expertise and developed a V6 with industry leading reliability, flexibility, package size, efficiency and value. This engine was developed by a unique team with talented members from across each of the global GM engine departments and suppliers. We have delivered an engine that can be easily integrated into most platforms, has industry leading NVH and performance with three discrete combustion systems MPFI, SIDI and turbo.”
The global engine family encompasses a range of displacements. In addition to the 3.6L variant that marks the launch of the new engine in production vehicles, there also are 2.8L and 3.2L variants. Engine displacement can be expanded to 3.8L, or as large as 4.0L when the cylinder liners are eliminated in favour of special cylinder bore coatings. Smaller-displacement global engine variants are particularly crucial in world markets where market conditions and competitive issues demand high performance from smaller engines.
Whatever the displacement, the global V6 engine family promises high specific power and torque competitive with the best contemporary V6 engines. The wide range of potential global V6 engine displacements and configurations allows power and torque output perfectly suited to a variety of vehicle, platform, drive configuration or market requirements. The global V6 engine family will effortlessly produce power ranging from approximately 150kW to more than 280kW; torque output will run from 272Nm to in excess of 476Nm.
Aside from the normally aspirated/sequential port fuel injection “foundation” architecture, possible major variants include:
• A spark-ignition direct-injection (SIDI) V6 of either 2.8L or 3.2L displacements. Petrol direct injection is a technology that can produce fuel-economy gains on the order of 10 percent, with no loss of performance. To be most responsive to regulatory and other market considerations, the global V6 engine design has provisions for both stratified-charge (lean-burn) and stoichiometric-charge SIDI architectures. SIDI engines are rapidly expanding in Europe and other regions with high fuel costs.
• Turbocharged engines of either 2.8L or 3.2L, with a variety of power and torque outputs depending on specific content. Turbocharging remains one of the best strategies to increase power and torque without increasing engine size.

From the start, the global V6 engine was designed to power:
• Front-wheel drive (FWD) platforms, in which the engine typically is situated transversely.
• Rear-wheel drive (RWD) vehicles and platforms, where the engine typically is longitudinally mounted.
• All-wheel drive (AWD) architectures, which can dictate either transverse or longitudinal mounting.
The global V6 engine is also suitable for parallel-hybrid application. Parallel hybrid vehicles employ a standard petrol engine and an electric motor or motors, either or both of which can propel the vehicle. Hybrid vehicles offer the prospect of greater fuel economy and can deliver other emissions and fuel-reduction possibilities.
The 3.6L Global V6 engine
The 2004 3.6L global V6 engine is the first variant of the global V6 engine family to go into production. The 3.6L global V6 develops:
• 194kW @ 6,500 rpm
• 339Nm of torque @ 2,500 rpm
The adoption of fully variable valve timing for both intake and exhaust valves – a first for any GM engine – provides outstanding flexibility, fuel economy and emissions-reduction. The four-cam variable valve timing is a key element in the global V6’s control strategy, which imparts the engine with extreme flexibility. For example, 90 percent of the 3.6L V6’s peak torque is available across a remarkably broad operating range: from 1,600 rpm to 5,800 rpm.
“Flexibility was very important,” says Bob Jacques base engine design system engineer. “We insisted on going after high performance and high refinement at the same time.”
Flexibility and Power Optimization

High feature technology is the essence of GM Powertrain’s philosophy behind the global V6 engine family.
The key technologies:
A four-cam continuously variable cam phasing system. This electronically controlled, hydraulically actuated system places a “phaser” on each of the V6’s four camshafts. The cam phasers enable the rotating of each camshaft relative to the crankshaft, eliminating the “fixed” camshaft positions of most engines.
Typically, fixed camshafts dictate valve openings that are a compromise between the desire to have the engine idle smoothly, produce good low-rpm torque, and high-rpm power. The global V6 engine cam phasers, which allow intake cam adjustment through 50 degrees of crankshaft rotation and 50 degrees for exhaust-cam adjustment, permit variability of valve timing to accommodate the often divergent needs for power, driveability, economy and least emissions.
In addition to enhancing power and torque and increasing fuel efficiency, the cam phasing system allowed engineers to eliminate the exhaust gas recirculation (EGR) system typical to most modern engines. By closing exhaust valves later than normal, the cam phasing system forces the desired amount of exhaust gas back into the combustion chamber for more complete burning in the next combustion cycle.
A dual-stage variable intake manifold (VIM). The VIM incorporates a switch in the manifold that changes the plenum volume available for resonance tuning of the inlet flow path. When the VIM switch is shut, the cylinders feed from two separate plenums. In this mode the system boosts cylinder charging in the low to mid speed range. At higher engine speeds, the VIM switch opens and the cylinders all feed from a common larger plenum which boosts cylinder charging at high engine speed.
An electronically controlled throttle (ETC) effectively coordinates the driver’s intentions with the actions of the various control components. ETC eliminates the traditional cable between the accelerator pedal and the throttle body. A throttle position sensor registers the degree to which the driver is depressing the accelerator pedal and translates that movement to a stepper motor that moves the throttle. By eliminating the mechanical connection between the accelerator pedal and the engine, throttle opening can be controlled with advantageous precision.

Micro-hybrid engine control unit ECU. The global V6 ECU represents the latest in engine-management hardware, as well as the software that dictates every aspect of engine operation. The micro-hybrid design embeds all of the necessary electronic circuitry on a four-layer “sandwich” substrate that drastically reduces the size of the control unit. Moreover, the micro-hybrid design imparts a new level of robustness that allows the ECU to be engine-mounted, despite the high levels of vibration the unit experiences from its engine mounting.
The micro-hybrid ECU can withstand mounting temperatures of 110 degrees C and vibration up to 30 g. The engine mounting frees valuable space in the vehicle underbonnet area and eliminates attachment problems at the assembly plant. The 32-bit capacity of the micro-hybrid ECU is the most powerful currently used for automotive application.
Torque-based engine control strategy. Engine output for the driver’s desired throttle opening is determined by the micro-hybrid ECU. The torque-based strategy calculates optimal throttle position, variable intake manifold position, continuously variable cam phasing positions and various other operational inputs and then translates that information into an ideal throttle position. The torque-based engine control strategy is superior to early electronically controlled throttle-based engine-management systems that relied only on the throttle position sensor to govern throttle opening.

The global V6 engine family encompasses an aluminium-intensive basic design, with all major pieces constructed of aluminium. The deep-skirt cylinder block is of precision sand cast 319 aluminium with cast-in-place iron cylinder liners. The cylinder head is a semi-permanent mould 319 aluminium casting. The upper intake manifold is composed of 319 sand-cast aluminium, while the lower manifold is made of 356-T6 aluminium.
The cylinder block incorporates six-bolt main-bearing journals and modular-type oil filter/cooler mounting point to facilitate attachment of the correct oil filter assembly. Cast in inter-bay breather vents in the engine block reduce windage losses at high speed.

The outstanding power and efficiency of the global V6 can be directly attributed to the continuously variable cam phasing system, which incorporates an individual camshaft phaser for each of the engine’s four camshafts. By rotating the camshaft relative to crankshaft angle, valve timing is infinitely variable over a 50-degree range of crankshaft rotation. This provides greater flexibility and control over engine breathing and translates to high specific power, excellent drivability and low emissions.
Cam phasing system components are designed to deliver maximum durability and outstanding NVH properties. In addition to the orifice-feed primary chain tensioner with startup reservoir and backlash control, a two-stage roller-chain camshaft drive enhances durability and reduces noise.
Valvetrain

The global V6 engine control unit, or ECU, is the most powerful and sophisticated currently available for automotive use. Its high capacity assures that each of the global V6 electronically controlled subsystems coordinates with the highest efficiency. The engine-mounted, 32-bit Bosch Motronic ME9 micro-hybrid ECU design was specified to deliver industry-leading performance in a remarkably small, durable unit. The ECU houses software that dictates every aspect of engine operation, from individual cylinder-adaptive knock-control sensing to torque-based engine control.
Ignition

The global V6 engine family features a coil-on-plug ignition system, delivering maximum energy spark and the most precise possible timing. The increased efficiency of the system contributes to lower emissions and, with fewer parts and no wires, improves quality, reliability, and dependability. Extended-life spark plugs have dual-platinum electrodes and service life of 160,000km.
A cam sensor, which monitors the camshaft position, and a crankshaft position sensor are used to manage spark timing. This dual measurement system ensures extremely accurate timing throughout the life of the engine and provides a backup in the event that one of the two sensors fails.
Emissions Controls